Life in an Ant Colony 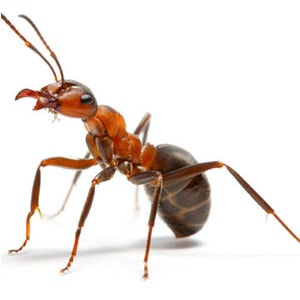 Ants are social insects which form small to large colonies. A typical colony contains an egg-laying queen and many adult workers together with their brood (eggs, larvae and pupae). Workers are by far the most numered individuals in the nest. They are responsible for nest construction and maintenance, foraging, tending the brood and queen, and nest defence.While all workers are female, they are sterile and do not lay eggs. Winged queens and males are present in the nest for only a short period. Soon after emerging they leave the nest to mate and establish new nests. Queens are generally similar to the workers, differing primarily in having larger bodies. In some species, fully winged queens are lacking and egg-laying is undertaken either by typical workers or by individuals which are morphologically intermediate between typical queens and workers (these are called ergatoid queens). Males are generally about the same size as the workers or smaller, and have smaller heads with large ocelli, very short scapes and small mandibles. In many cases males look more like wasps than ants.Workers in a single nest can all be the same size or they can very greatly in size. When all are of the same or a similar size they are said to be monomorphic. In some cases the variation in size can be so extreme that large workers are twice the size of small workers (figures right). If variation between small and large workers is continuous, the workers are said to be polymorphic. If there are only two distinct size classes of workers, they are called dimorphic. Many of the polymorphic and dimorphic species show allometry. That is, the heads and mandibles of the large, or major, workers are disproportionally large when compared to those of the small, or minor, workers.The workers are the most commonly seen caste, especially as they forage on the surface of the ground or when they are disturbed under rocks or other objects. However, in most species not all workers forage outside of the nest. Ants show a strong division of labour, where different workers perform different tasks within the nest, and in some cases the specific tasks undertaken will depend on the age of the ant.It is common for young, newly emerged workers to remain in the nest and tend eggs, larvae and pupae. As the workers age, they may shift their activities away from tending brood and begin to undertake nest construction and excavation. Finally, later in life they may become foragers, leaving the nest to search for food. In contrast to this, some workers may perform the same activities throughout their lives, or in other cases, all workers may undertake all activities of the colony, performing any given activity for a few days before switching to another. In many dimorphic and polymorphic species, the size of the worker will influence its activities. For example, major workers may only be found in or near their nests while only minor workers forage away from the nest.This cooperation and division of labour, combined with their well-developed communication systems, has allowed ants to utilise their environment in ways approached by few other animals.

FEEDING: The majority of ants are predators or scavengers, feeding on a wide range of prey including other arthropods and seeds.Adult ants feed exclusively on liquid foods. They collect these liquids from their prey or while tending Hemiptera and other insects. Solid prey, that which is most often seen being carried by workers, is generally intended as food for larvae. Adults which remain in the nest, including the queen, receive much or all of their food directly from returning foragers in a process called trophallaxis. During foraging, workers collect fluids which are stored in the upper part of their digestive system (the crop). Upon returning to the nest, these workers regurgitate a portion of this stored fluid and pass it on to other workers. In some extreme species, this fluid is transferred to special workers, called repletes or honey ants, which remain permanently in the nest and act as living storage vessels. They store food when available and distribute it to the colony in times of shortage.

While most ants will feed on a wide variety of foods, others specialise on a much narrower range. A number of species, especially those in the genera Pyramica and Strumigenys, show a strong preference for Collembola. Others (for example species of Discothyrea) prefer the eggs of assorted arthropods. Still others (especially Cerapachys and Sphinctomyrmex) raid the nests of other ants to capture their larvae and pupae. Many of the groups with specialised feeding requirements also possess unusual morphological adaptations. For example, the mandibles in some of the highly predacious groups are much elongated and are armed with large teeth, especially at their tips (these include Anochetus, Epopostruma, Odontomachus, Orectognathus, some Pyramica and Strumigenys).The seeds of many plants have special food bodies (called elaiosomes) which are attractive to ants. Ants collect these seeds, eat the food body and sometimes the seed as well. However, many of the seeds remain intact after the food body is removed and are often placed within the ants’ nest or on their midden piles where they later germinate. It is believed that seeds collected by ants have a higher chance of germinating and surviving when compared with seeds which are not collected. This is because they are less likely to be attacked by seed predators and because they are often placed in sheltered locations near the ants’ nutrient-rich refuse piles. In general, ants show a preference for foraging either during the day or at night. In some groups foraging will occur both during the day and at night, although there may be peaks of activity with fewer foragers active during other periods. In the arid zone, the foraging activities of many species are highly dependant on temperature. Some species (for example most Tetramorium and some larger Rhytidoponera) are only active during the cool morning and evening hours, while others are active only during the hottest parts of the day (members of Melophorus). On cool or heavily overcast days, species which are normally only seen at night may be active during the day while high-temperature loving species may remain in their nests all day