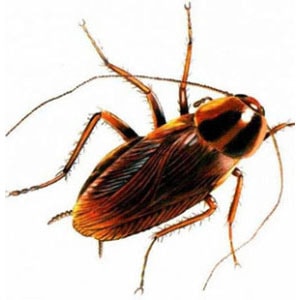 CHARACTERISTICS: The general form of cockroaches varies little, however their size can range from only a couple of millimetres in length up to 70 millimetres. There are just over 400 species of cockroaches in Australia out of 4000 worldwide, the best known being the introduced pests which commonly inhabit houses, restaurants and sewers. All cockroaches have the following characteristics.

LIFE CYCLE: Cockroaches have incomplete metamorphosis. Most species of cockroaches lay eggs in an ootheca (egg case) that is either deposited on or under suitable substrate, or carried attached to the genital region. The egg stage lasts from a few weeks to a few months. The young are active from hatching and resemble the adults but are usually lighter in colour and lack wings. The young cockroaches develop through a number of nymphal instars, which may range from 2 to 12 depending on the species and may take from a month or so up to 12 months to reach maturity. Some species may live for several years.

FEEDING: Much of the feeding habits of native Australian cockroaches is unknown, but it is likely the majority are omnivorous. Some species are known to feed predominantly on rotting wood while some species harbour symbiotic gut Protozoa that aids in cellulose digestion. The introduced domestic species appear to eat almost anything.

HABITAT: Cockroaches in Australia are widespread and adapted to both wet and dry environments. Most species are nocturnal and ground dwelling and are usually found hiding during the day in crevices, under bark, rocks or logs and in burrows. Some species may occur on plants or in litter and some also occur solely in caves or ant nests. Others are associated with human habitation.